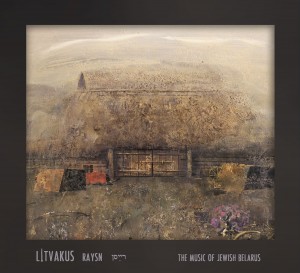 The 2014 Litvakus album, RAYSN, the Music of Jewish Belarus, explores a previously unknown side of Jewish and klezmer music. The album tells a powerful story about a place where Jews and Litwins (the Belarusians’ pre-colonial ethnonym) coexisted for more than seven centuries, creating the unique Belarusian culture, separately and together. RAYSN (pronounced rye-sin) presents rarely heard music from two endangered cultures, Yiddish/ Litvak and Belarusian/ Litwin.

For a contemporary klezmer record, the sounds of RAYSN may be unexpected. It does take by surprise, but it also overpowers by the warmth of the deeply rooted tradition. Bagpipe-like drones, drones on the fiddle and bass, shtetl disco feel, authentic and vibrant, come to life as this music had existed before being washed away by urbanization, Soviet and Nazi genocide, the decimation of the non-majority culture, emigration, assimilation, and a slew of other atrocities. Seven centuries of existence preserve this music its rightful place in the future, and Litvakus gives it a voice.