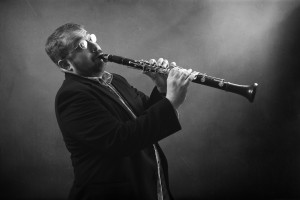 “…the brave sound of klezmer, played with a full heart and as loud as the clarinet can blow.” – TimeOut New York

“…The refined arrangements by Hankus Netsky with Jesse Gelber and Dmitri Slepovitch should be as appealing to the khazones newcomer as they are familiar to the khazones connoisseur.” — Opera Today

“Mr. Slepovitch’s mastery of five languages… has greatly aided the community aspect of the class.” — The New York Times

“Traveling the Yiddishland” is a long and fascinating journey, and not just a single stop.” — Forward

“Presented under the title “New Worlds: A Celebration of I. L. Peretz,” the two pieces, with English and Russian supertitles, add up to admirably creative, visually and aurally engaging theater… Receiving its premiere here, “Di Tsvey Brider,” draws on… music performances by Matt Temkin and Dmitri Slepovitch (who composed the score)…” — The New York Times

“The songs, compiled by Chana Mlotek with Zalmen Mlotek and director Eleanor Reissa, are expertly sung by the strong-voiced cast and buoyed by the sure-handed musical direction of Dmitri Slepovitch.” — OffOffOnline.com

“The performance’s creepy “Tales From the Crypt” vibe gained much from the atmospheric score provided by Dmitri Slepovitch, Belarusian musician and ethnomusicologist, who played some of his region’s distinctive Jewish music during the intermission. Slepovitch is a terrific clarinetist and a genuine ham.” — Forward

“Dmitri Slepovitch was one of my favorites, with infectious, ethnic charisma, as he filled the auditorium with traditional Russian themes.” – Russian Jazz at JCC in Manhattan review, 2009

“Getting Dmitri, with his encyclopedic knowledge of historical and contemporary klezmer, turned out to be a master stroke.” — Clayton Frohman, screenwriter, Defiance movie

“Dmitri is doing extremely important research work on klezmer in Belarus as a doctoral musicology candidate. He is a great clarinetist and the Minsker Kapelye’s CD is quite excellent – a testament to hard work, sensitivity to the genre/repertoire and to the virtuosity of the band’s members.” — Pete Rushefsky, Executive Director, Center for Traditional Music and Dance.