“Traveling the Yiddishland” is a long and fascinating journey,
and not just a single stop. (Jewish Forward)

set out for the most remote shtetls in the Pale of Settlement with a wax cylinder recorder on a mission to preserve rare folk tales and songs. One hundred years later, Dmitri Slepovitch and Nina Stepanskaya (1954–2007) made their own journey, this time with a video camera, on a mission to preserve the disappearing Jewish songs of Eastern European Jewry in the 20th Century.

The National Yiddish Theatre – Folksbiene proudly presents the result of this inspiring research – Traveling the Yiddishland. Created by Dmitri Zisl Slepovitch and performed by his band Litvakus and Michael Alpert, an outstanding Yiddish musician, dancer, and folklorist, – it is a musical journey across the routes of the Jewish history in the 20th century Eastern and Central Europe – brought to the modern audiences through the original videos and live performance.

This 75-minute program sans intermission includes rare Yiddish songs as heard by the young generation artists, as well as traditional and original klezmer tunes, documentary footage, and storytelling. The material used in the show comes from the author’s decade long research carried on in his home country, Belarus, a crossroad of cultures, an important locus for the Ashkenazi Jewish culture for about seven centuries. 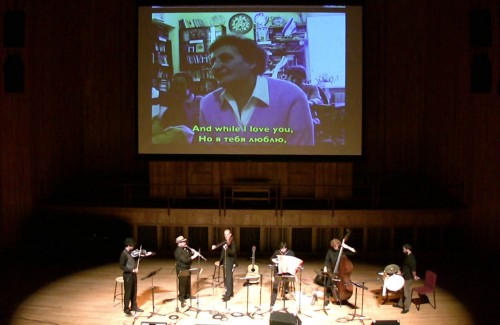 Having presented part of the nearly forgotten Belarusian Jewish musical heritage on the Minsker Kapelye’s CD album Tutejsi (The Locals) in 2009, Slepovitch visualizes the culturally rich material in the new musical ethnographic theater production. Using multimedia projection, the author creates an interactive dialog between folk singers, musicians on stage, and the auience.

Traveling the Yiddishland is culturally relevant for all audiences, regardless of their background, as it raises the questions of identity, roots, and history.